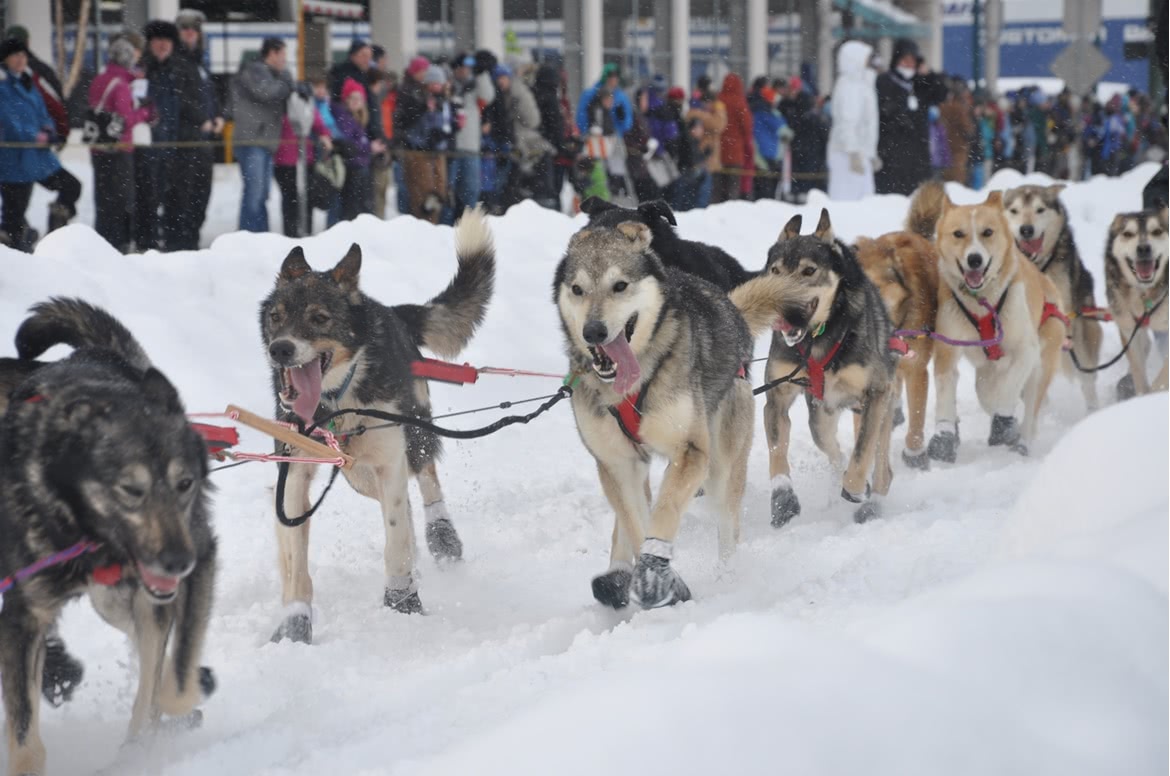 In the late 1800’s thousands of gold prospectors hit the ground running to chase their dreams of striking rich in the Yukon during the Klondike Gold Rush.  Many prospectors left the Pacific Northwest and headed to Alaska on boats where they could travel directly to the Nome. From October to June, the steamboats were unable to dock at the port in Nome due to the buildup of thick sea ice. When the port of Nome closed,  dogsled teams transported mail, medication, food, furs, firewood , gold ore and other essential supplies and tools between Nome and Seward on the Iditarod Trail, a dangerous journey  stretching  1,000 plus miles through the epic landscapes of scoured ice capped mountains, deep snow, subzero temperatures, whipping winds,  and prolonged darkness. The sled dogs and mushers were the only way to make the trip possible and they were true heroes for the settlers in Nome.

In 1925 a diphtheria epidemic hit Nome and about two dozen mushers and over 100 sled dogs transported Serum, a diphtheria vaccine, to Nome. The trip took just under six days and essentially saved the lives of thousands of settlers in Nome and the surrounding villages. This trek was coined as the Great Race of Mercy.

From the early 1900’s through the 1950’s, dog sledding remained a popular way of transport, communication and sport, but started to phase out as airplanes took to the skies in the 1920’s.  By the 1960’s, snowmachines hit the trails and most sled dogs retired to their kennels. Technology prevailed and the Iditarod Trail was abandoned and its significance to Alaska was temporarily forgotten.

In the late 60’s a few dedicated Alaskans worked to bring back the rich history of the Iditarod Trail that had died over the previous three decades. After a few sprint races in the late 1960’s, the momentum of bringing back the Iditarod Trail was lost. However, in the early 70’s, the U.S. Army started training on the trail and there was another push to bring back the trails history in the form of a race that once again traveled the harsh 1,000 plus miles, through the unforgiving Alaskan wilderness, to Nome. The race became known as The Iditarod: The Last Great Race on Earth. In 1973 mushers and their dog teams hit the trail in the first annual running of The Iditarod.

Today, the ceremonial start of The Iditarod starts on the first Saturday in March in downtown Anchorage, right in front of our store, Big Ray’s: The Alaskan Outfitter. The streets are flooded with thousands of spectators who travel to Alaska to support the many nations competing. There are few events quite like it. Lucky for us, we also get to celebrate the Yukon Quest at our downtown location in Fairbanks. This year marks the 43rd Anniversary of The Last Great Race on Earth. If you’re in Alaska for the first weekend of March, the ceremonial start is a must see. Downtown Anchorage is bustling with excitement, culture, furs, delicious food and fun for the whole family. The race kicks off at 10:00AM sharp on 4th Avenue, we’ll see you there!